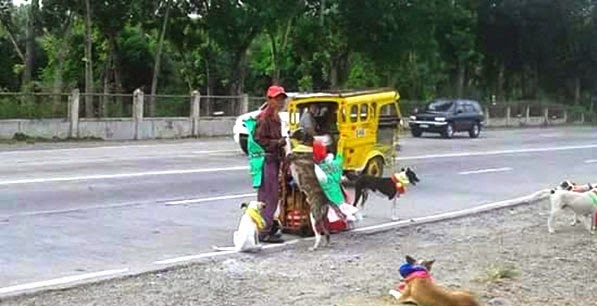 Maximo De Lima, which is now known as "Journey Max", is viral on social media after he chose to walk home together with his dogs than riding a bus leaving his pets behind.

Recently he just reached Tagum City, together with his cart and his 6 dogs. Four of his dogs did not survive the walk and died.

Journey Max is thankful to the people who saw him for offering him food and water for himself and his pets.

This 72-year old man was 20 years old when tried his luck by residing in General Santos City. Now that he is old, unmarried, he wanted to go back to his home in Ormoc City to live with his family and relatives without leaving his dogs that he had taken care of for 4 years.

The Dog Owners of Tagum Association promised him a free ride, with his dogs, to his place of destination.

This man shown real love towards animals. It is hard to go away from a place leaving important things behind, especially these are dogs. Dogs may not be able to get inside a bus or it could but it will be so expensive.

The choice of walking the road home just to bring his pets with him, is an amazing act. Making those dogs real family to him.

This trending topic was reported by Hernel Tocmo in TV Patrol.